I got a message on techiesms’s WhatsApp number regarding help for making one project. The project was to measure pressure exerted on the pressure sensor and display it on a smart phone. So I helped make that project and decided to make a tutorial video on monitoring any sensor’s data on our smart phone.


I used the most popular board for IoT related projects ESP8266. Now as we know that most of the sensors existing in the market gives us output in analog form, so I opted for ESP8266 12e development board instead of ESP8266 01 as the ESP8266 01 module doesn’t have analog pin while ESP 12e has 1 analog pin in it. After that I have used 14.7 mm Force Sensitive Resistor (FSR) for explaining the concept but you can use any sensor. So whenever the sensor is pressed the varying voltage value will be appearing at analog pin 0 of our esp board and the esp board will publish that reading on Adafruit IO server through MQTT protocol. And on the smart phone side, we need to install an app called IoT MQTT Dashboard from Google Play Store.

For this project I have used:

NOTE: Do buy the components from our own shop (techiesms shop). Link of the products is provided above.


Hardware connections for this project is something like this: 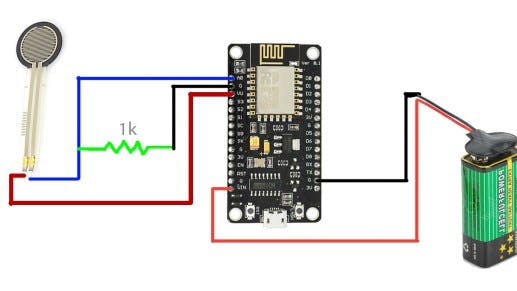 
I have explained the code, project working, app configuration and even making an account in Adafruit in very much detail in the below mentioned video. So watch this video to know everything regarding this project.