The signal from device generated is known as baseband signal which is not directly transmitted to the desired place but it is modulated before feeding the signal to the transmitter. Modulation is a technique of varying any component of the carrier signal in proportion to that of a baseband signal. In this article, I have covered several Analog and Digital modulation techniques. Mentioned its basic definition with figure and the important thing, practical application of that modulation technique.So let’s go into brief description and application of some of the techniques.

In the simplest way possible, AM can be explained as changing Amplitude of the carrier signal or the high-frequency signal with respect to the modulating signal. 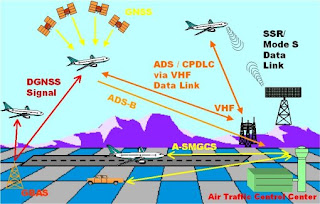 1. It is used in Aircraft for communication between station to pilot and vice versa. So why didn’t they opt for FM which is less affected by noise as compared to AM? The reason I found is that AM is used so that multiple stations on the same channel can be received. While in FM, reception of a weaker signal is blocked by the stronger signal which is normally known as capture effect. 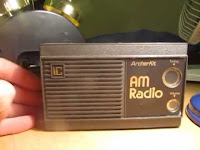 2. It is still used in commercial radio broadcasting. But AM having a Low frequency, they only broadcast the commentary or news or we can say only vocals will be there. As the frequency is increased, with ground wave propagation attenuation will increase. Hence FM having higher frequency will get more degraded in a ground wave as compared to AM. But still, use of FM is more than AM. Because it uses direct wave propagation(line of sight).

Frequency Modulation
In case of frequency Modulation, the frequency of Carrier is varied with the instantaneous value of modulating the signal.An advantage of FM over AM is that it has the ability to reject the noise or in the other way, noise doesn’t affect much in FM. 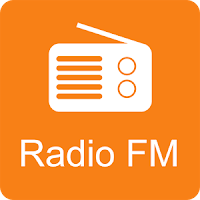 1. The most common application which I don’t think any of you is not aware of this. i.e. FM Radio broadcasting.

2. It was surprising to me also to know that, FM was used in VCR tape recorder.For storing Luminance i.e. the black and White portion of the video is recorded by FM modulation in this analog Tape while the color part is directly recorded by the baseband signal. I didn’t get more data in this but I came to know that it uses FM for recording.

Quadrature Amplitude Modulation
Till now we have seen that only single parameter is changed with the instantaneous value of baseband signal. But in QAM, two parameters of the signal are changed Amplitude and Phase. In short, QAM is made up of AM and PM. QAM is also known as QPSK(Quadrature Phase Shift Keying) which can be treated as a mixture of ASK(Amplitude Shift Keying)  and PSK(Phase Shift Keying).
QAM can be of different types depending upon the number of possibilities of Amplitude and Phase.
For Eg. I have shown two fig. in which first is 8-QAM (2 diffs. Amplitude & 4 diffs. Phase), and the second fig. is 16-QAM ( 4 diffs. Amplitude & 4 diff Phase). 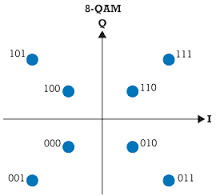 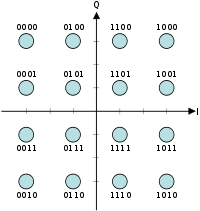 2. WCDMA(Wideband Code Division Multiple Access) commonly known as a 3G connection of our mobile phones also uses QAM. WCDMA uses 64 QAM. 64 QAM has 6 bits per symbol while our 2G connection has only 3 bit per symbol hence 3G is much faster than 2G.
Amplitude Shift Keying
Till now, the modulation techniques were used for analog signal, but now the modulation techniques we will discuss are used in digital signal modulation. First is ASK, it is very much similar to AM, in which Amplitude of the carrier is varied in proportional to the digital baseband signal. As digital signal is a binary signal, so we will have only 2 different amplitude value in ASK. ASK modulation is shown below. 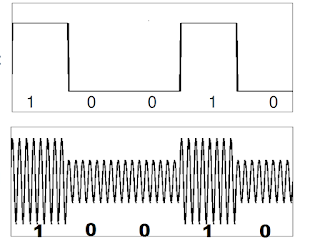 1. ASK Modulation is used in RF Modules. I have used this module much time for making wireless robocar. We need to attach Encoder and Decoder IC to code decode the data. And the digital data from the Encoder is modulated by ASK and then it is transmitted. 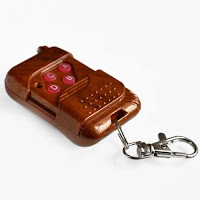 2. Some of the RF remotes and RF car keys also uses ASK modulation for transmitting digital data over the air. While studying about RF car keys, I found that in some of the car keys, every time the button is pressed different data is transmitted so that one can’t just simply copy and transmit the same data to unlock the car.
On-Off Keying
On-Off Keying(OOK) modulation technique is similar to that of ASK. The difference is that in On-Off keying, binary ‘0’ is represented by 0 volts while binary ‘1’ is represented by some fixed amplitude. And frequency in both the cases will be same as the carrier frequency.

2. The enhanced version of GSM is known as EDGE ( Enhanced Data rates for GSM Evolution )uses 8-PSK modulation technique for faster data transfer as compared to GSM. GSM uses only 1 bit per symbol for data transfer while EDGE uses 3 bits per symbol for data transfer. It is commonly called as 2.75G network
Minimum Shift Keying
MSK modulation can be compared with PSK modulation but the difference between them is, in MSK there is no abrupt change in the phase of the carrier signal, rather there is a very smooth transition between different phases. It looks similar to that of FSK.

1. MSK is used with Gaussian filter ( commonly known as GMSK ) is used in GSM mobile communication or 2G network. A Gaussian filter is used to reduce the sideband power of the spectrum. Its data transfer rate is only 1 bit per symbol. The enhanced version of GSM was developed which is known as EDGE( Enhanced Data rates for GSM Evolution ) which uses 8-PSK modulation which uses 3 bits per symbol, faster than GSM.

2. Ships use GMSK modulation technique for communication with other ships as well as the station. Data like a speed of the ship, its current position, Estimated Arrival Time, Type of the ship etc is constantly transmitted through Time division multiplexing. This Tracking system is known as Automatic Identification System (AIS).


This much of data I got when I was researching the topic “Application of modulation techniques”. If you know something more than this, do share it with others by commenting below.